Women Who Inspire Me: Karen Harris

Women Who Inspire Me: Karen Harris

Throughout my career, I’ve met many women who inspire me; either with their remarkable courage, their desire to make an impact in the world, or their readiness to go out on their own to pursue their dreams.  Each month I’m going to feature a new woman who inspires me.
Please check back on my blog and see who’s featured next! 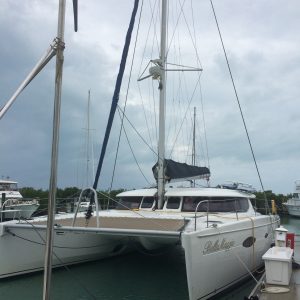 One of the boats Karen sailed to Cuba

At a Women of Vision Awards luncheon hosted by the Chicago law firm Saul Ewing Arnstein & Lehr LLP, I had the good fortune of sitting next to Karen K. Harris, a partner at the firm. The Women of Vision Award celebrates the achievements of successful businesswomen, presenting the award annually at a luncheon to recognize an inspirational woman who has made a difference in the professional world and to highlight a notable charity within the community.

It was after Memorial Day, so following our initial introductions at the table where I was sitting, I asked Karen how her holiday weekend was.  Karen responded that she’d sailed to Mackinaw Island for the annual Race to Mackinaw.  She’s done it seven times.  When I asked her more about it, Karen mentioned she’s Commodore of the Jackson Park Yacht Club, on the south side of Chicago, 6400 S. Promontory Drive. I instantly was intrigued.  When Karen mentioned her mom is white and her father is black, I thought, “How cool is it that a woman is in charge of a yacht club…and especially a woman of color, in a what is traditionally a white male sport?”

Karen graciously accepted my invitation to have coffee, as I wanted to hear more about her story.

Karen’s mother was a public school teacher, and when she and her brother Joey were kids, her Mom said they had one of two choices in the summer: either going to “away camp” or taking sailing lessons.  They chose sailing. Beginning at the age of 10, every summer Karen and Joey would take sailing lessons at Chicago’s Columbia Yacht Club.  She started teaching sailing at 16, and taught through college at Princeton.  I wondered what characteristics make Karen both an effective Commodore of a yacht club as well as partner at a law firm?  Communication is key, she said.  Since serving on the yacht club is voluntary, she has to motivate volunteers to be engaged to continuously make the club successful.  Also, creativity is important.  “I constantly need to think of what will be beneficial for the club and the people who sail there.”  This past year, after a 20-year hiatus, the club brought back a Junior Sailing Club, geared for eight-to-14 year olds.  “The successful creation and implementation of the youth sailing program is one of my proudest community accomplishments,” said Karen. “We had nearly 60 kids learn to sail this summer and it was great to watch them explore the water and sailing for the first time. I love that we’re teaching kids to sail in a minority neighborhood, and we’re able offer scholarships for those who cannot afford to pay on their own.” The Jackson Park Yacht Club has the largest number of African American sailors in the country, and being the Commodore, Karen is only woman to hold that designation out of 12 yacht clubs in the Chicago area. 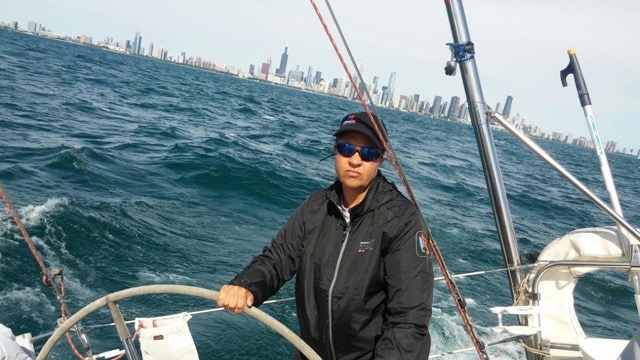 Karen at the helm racing

Sailing has also helped Karen in her career.  She said, “I’ve learned not to be afraid.  It’s given me so much more confidence.”  Karen continued, “Rather than following a traditional path or trajectory, learning how to sail has taught me to be flexible, which is incredibly important.”  It also allows her to briefly escape her busy life and re-charge.  “Being on the water is so freeing.”  Karen is indeed fearless.  In the summer of 2015, shortly after Cuba opened its doors to U.S. visitors, Karen organized a team of 21 people from Chicago, Colorado and the East Coast and participated in the Conch Republic Cup sailing race. When diplomatic relations between the U.S. and Cuba were restored in 2015, the Conch Republic Cup was resurrected after a forced 13-year hiatus. Karen’s group raced a 46-foot catamaran and a 50-foot catamaran from Key West, Florida, to Varadero, Cuba.  After 15 hours of sailing to Varadero, the team raced another 10 hours from Varadero to Havana.  Karen said the Cubans were thrilled to see Americans, although their concept of America was from the 1950’s.  She loved how friendly and accommodating they were.

Karen and her niece on the boat

I found Karen’s story inspiring.  Her love of sailing has not only honed her leadership and problem-solving skills but gave her the courage to steer her course for unfamiliar waters.